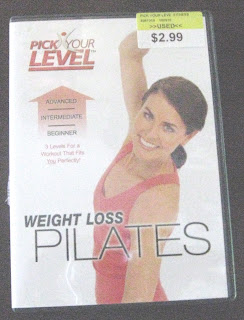 Getting in and out of the back seat of a car involves me unfolding myself slowly allowing each body part to get adjusted to the new position . A friend was saying that she now exercises in the morning after arising. She says that it has tremendously helped the hip pain she'd been having. In an attempt to keep the joints lubricated I've been doing a few rotations of the body parts before getting out of bed. 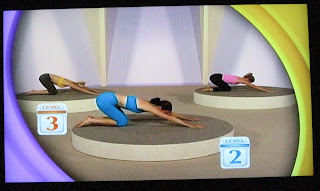 The Movie Stop Game Stop store sells pre-owned DVDs and games. I purchased two DVDs. One was Leslie Sansone Walk ???( She has several walking DVDs)and the other was Weight Loss Pilates. How can I go wrong at $3 each?

The Pilates DVD allows the person to pick their own level. There's Beginner, Intermediate and Advanced. 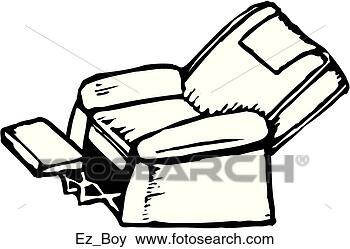 The first thing I did after removing the DVD from the shrink wrap was to sit in my recliner and watch the DVD. 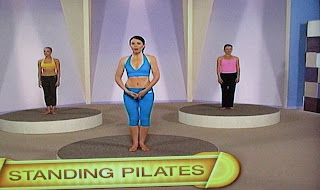 I decided to do the Beginner's level since that's what I am. I'd thought Pilates would be easy. After about 10 minutes I was getting tired and feeling all of the muscle groups I haven't used. This is some serious stuff. It was kicking my butt. After 20 minutes I had to give it up. What's even more aggravating is the way the women on the DVD are not sweating as if they're actually having fun. I didn't beat myself up. I did learn that breathing is important. The instructor constantly reminded the viewer about correct breathing patterns. I believe that incorrect breathing can cause a person to tire out pretty fast. I know that I'm guilty of holding my breath while I'm exercising. I didn't realize this until I began concentrating on the correct way. 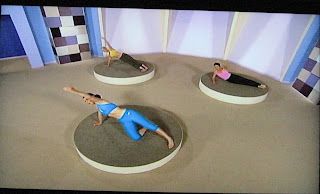 I was also proud of myself for holding out for 20 minutes because the disk is only 30 minutes long. I plan to try it again because I did seem to gain some energy and endorphins.
THAT'S IT***
Posted by c-ing at 2:08 PM No comments: Links to this post 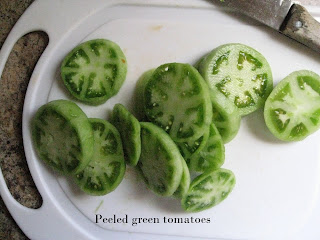 If you will recall, I signed up for Grow Alabama. In one of my veg boxes, I had green tomatoes. I wasn't sure what to do with them. Fried green tomatoes are good but I've never been successful with trying to make them. I've been trying to eat more healthy and so I searched for an alternative and found Baked "Fried" Green Tomatoes.

This isn't the recipe I used and I don't remember the website I got mine from.

1/4 teaspoon black pepper (or the pepper!)

Place a baking sheet in the oven for 5 minutes to get it plenty hot.

Spray it with cooking spray.

Serve hot, they don't improve! A'int that the truth 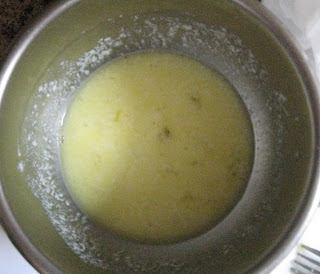 I'd read someplace that buttermilk could be frozen but it would only be good for cooking when unthawed.

I used buttermilk that I'd frozen some time back when I'd needed buttermilk for another project. After unthawing, it didn't have the same consistency as originally. I put about a TBS of white vinegar and waited 5 minutes for the two to react. 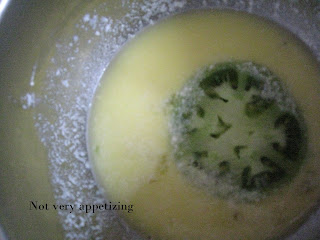 I dipped the slices in the buttermilk one at a time. 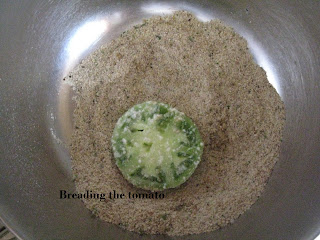 I didn't have any cornmeal so I used bread crumbs. I placed in all of the seasonings except kosher salt. I used regular salt. 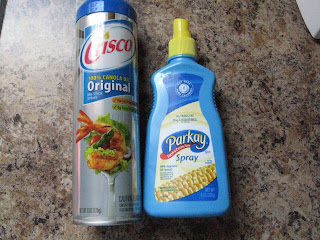 The next step was to spray a cookie sheet with nonstick spray. 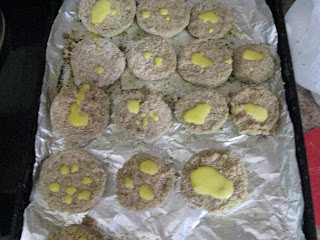 Place the breaded tomatoes in a single layer and brush with butter.
BTW- That's Reynolds nonstick foil I'm using. It lives up to its claim. I sprayed the foil anyway.

NOTE: If I brush with butter the coating will come off. Instead I put Parkay no calorie spray on each one. AS you can see, I poured and drizzled instead of sprayed. 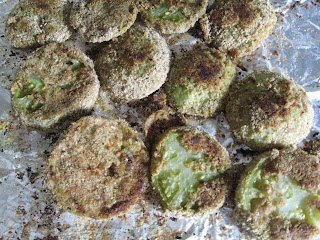 Here is the final product.

Edible but not so great. Too tart.
My recipe didn't suggest using any sugar. The next time I'll try the above recipe.

Grow Alabama is an organization that allows the public to have fresh produce in season delivered to various pick up sites where the customer picks them up.

The levels include gold, silver and bronze. Each of these levels has a different price and amount of produce the consumer receives.

I chose the silver level. In it I will receive 6 different vegs/fruits. It is enough for 3-4 servings. The consumer is allowed to order 2 of something if one of the items is not to his liking. For instance if cucumbers are in the veg box and you don't like cucumbers, you can get two of squash, if squash is one of the vegs offered that week.

I bought one of the certificates for $49 that would allow me to have $99 worth of food over a four week period.

Below are the items I received during week three. 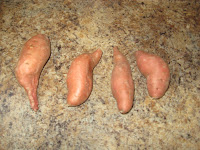 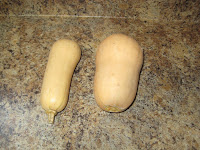 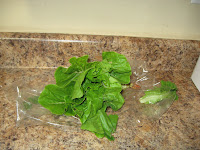 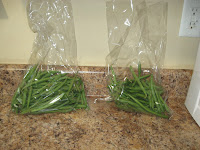 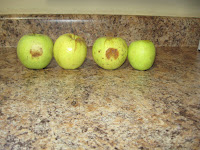 As you can see there are only 5 different items. That is because I chose to have two orders of string beans in place of cucumbers.

I made sure that I showed you the bruises on the apples. They still turned out to be very good.

I won't continue in this program because:

1.The person I talked to on the phone about where to pick up had the personality of vinegar and lemon.
The place I wanted to receive my produce was to get its deliveries at 2:30. I had to be at work by 4:00. At 3:00 the vegbox had not arrived. I called the office and the woman was not rude but she showed little concern. I told her I was new to the program and was not familiar with how it worked. I had to extract (as in dentistry) any information I needed to make a decision.
Though I've never met her, she reminded me of the Carol Burnett character, Mrs. Wiggins.


Woman: I'll call the driver and call you back.
Me: waiting, waiting, 3:10. She hasn't called me back. I call back and ask, "Is he coming?".
Woman: He didn't answer his phone.
Long pause ....waiting for her to give me further instructions.
Me: What should I do? I've got to be at work at four.
Woman: I can give you a credit.
Long pause... waiting for her to tell me what a credit is and how it works
Me: What is that? How does it work?

Getting information out of this woman was excruciating.

2. I never knew from week to week what I would be getting unless I called, though my e-mail address was on file. I had to ask for that also.
3. The list would say there'd be eggplant and then when I get my vegbox I didn't have eggplant instead I'd have two squash. I guess they ran out of eggplant and gave two of whatever was plentiful.
4. One week I received an e-mail that there wouldn't be a delivery. That was fine but the Woman put everyone's e-mail address in Cc instead of Bcc. Now everybody knows everyone else's e-mail address.
5. The following week there was no delivery because of the death of one of their employees. That's understandable. I respect that.
6. My last vegbox was last week. I don't plan to reorder.

I'd like to support the local farmers but I have not been pleased with the service especially customer service. Although when I called in last week a new person answered and she had much better customer service skills. I told her so. Still, this is more trouble than it is worth.
Grow Alabama needs to polish its skills.
THAT'S IT***
Posted by c-ing at 2:46 PM No comments: Links to this post